Keeping your gums in a good state is very important for our oral health and aesthetics, since their function is to keep teeth in their place.

An alarming sign a priori is the darkening of the gums. The causes of black gums may be diverse, but do not become frightened, most of them are not harmful to your health.

Gums are formed by a hard, fibrous and sensitive tissue. They serve to join the teeth and the alveolar bone.

They usually have a rosy aspect, but sometimes they develop black or dark brown marks, although, in most cases, they represent more of an aesthetic problem than a health one.

Sometimes, however, black spots can indicate a more serious complaint. To be sure, the best thing is to consult your odontologist if you detect dark marks on your gums, especially if they are also painful and change, size, shape or colour.

The solution to black gums will depend directly on their cause.

There may be different reasons why gums go black. By maintaining a correct oral hygiene, we minimise the risk of suffering associated diseases.

Gums can be injured like any other part of your body. Falling flat on your face, eating something with sharp edges or even brushing your teeth or using dental floss too vigorously can damage your gums. Bruises on your gums are usually a dark red or violet colour, but they can also be dark brown or black.

These injuries usually heal by themselves without the need for medical treatment. If the hematoma does not remit over time, it is recommendable to consult an odontologist.

When a tooth is about to erupt, it may create a cyst full of liquid. This cyst can sometimes comprise blood mixed with liquid, which can make it be seem purple, black or brown. When an eruption cyst has blood in it, it is called an eruption hematoma.

Eruption hematomas are common in children, since they emerge with both their milk teeth and their permanent teeth.

They generally disappear by themselves after the tooth has emerged. If the tooth does not come out on its own, the odontologist can surgically open the cyst to let the tooth come out correctly.

Another cause of black marks on the gums are the so-called amalgam tattoos. On filling a cavity with a silver amalgam filling, it is possible that a deposit of amalgam remains in the gums, creating a dark mark.

Amalgam tattoos cannot be removed, but they are inoffensive and do not require treatment.

A blue nevus is an inoffensive mole, which is round and flat or slightly raised. Blue nevuses can be black or blue and they are generally seen as freckles on the gums.

The cause of the blue nevuses is unknown, but often they develop during childhood or adolescence and are more common in women.

Generally, they do not require any treatment. However, if their shape, colour or size begin to change, the odontologist may perform a biopsy, extracting part of the nevus to analyse it and rule out the possibility of cancer.

An oral melanoacanthoma is not a very common complaint leading to the development of dark stains on different parts of the mouth, including the gums. These stains are inoffensive and tend to appear in young people.

The causes of an oral melanoacanthoma are unknown, but it seems to be associated with injuries caused by chewing or friction in the mouth. These marks do not require treatment.

To determine whether a mark is caused by cancer, the odonotologist will carry out a biopsy and will use different imaging techniques, such as computerised tomography, to check if the cancer has disseminated.

If the stain is cancerous, it may be surgically removed if it has not spread. If it has spread, radiotherapy and chemotherapy may help to destroy the cancerous cells.

Drinking huge amounts of alcohol and smoking are the greatest risk factors to develop oral cancer.

In short, black marks on the gums are usually inoffensive, but sometimes, they can be a sign of denture problems in children, or of oral cancer. If you notice a new mark on your gums, it is important to inform your odontologist. Even if the mark is not cancerous, it should be monitored to detect any change of shape, size or colour. 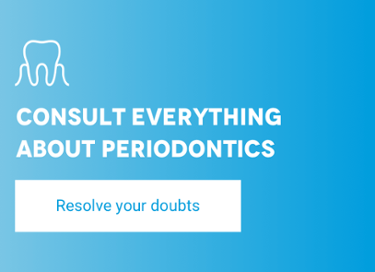